Where is the test Univeral Mobile Statistics Site ?

It’s a mobile world - everybody knows that. It’s been like this for almost a decade now. The funniest thing is that we still don’t have an Alexa for the mobile industry. There is no publicly available source currently which I can take a look at to see where my / my company’s mobile application ranks amongst other apps of the sametype. There are challenges to get statistics from mobile applications - distribute processing, offline/online support, hybrid applications all lead to

In my opinion there are three ways to do this.

Which option did we choose?

We, at Survey Analytics have chosen going down the path of #3 above. As a company it was an easy path for us because we already had a Panel management software. Just to help you understand - a Panel management software typically supports survey panels which allows you to create a list of respondents that you can invite to participate in surveys over and over again. These respondents are referred to as panelists, where each panelist subscribes to a survey panel and provides demographic information about himself/herself. The incentives for the respondents vary depending on how motivated they are to provide feedback.

What we did was tweak this infrastructure to ask permission to collect ‘passive’ data. So essentially from a panelist’s standpoint they first download a mobile application (called SurveySwipe) and as soon as they login for the first time they get prompted with the Terms and Conditions (T&C) to collect non personal data from their mobile applications. The most important thing in terms of design is that the collection of the data is based on ‘triggers’ so that we don’t collect data always but based it on days of the week and time of the day or an external trigger like filling out a survey.

Results of running on a Panel of users for 3 months

Here are some of the key statistics of the panel we used to collect mobile app usage metrics :

We collected ‘passively’ the data around the top mobile apps running on this panel. Here is the chart produced for the most frequently running apps.

After we got the data on the servers, we used R to ensure we have complete samples and this is what we got : 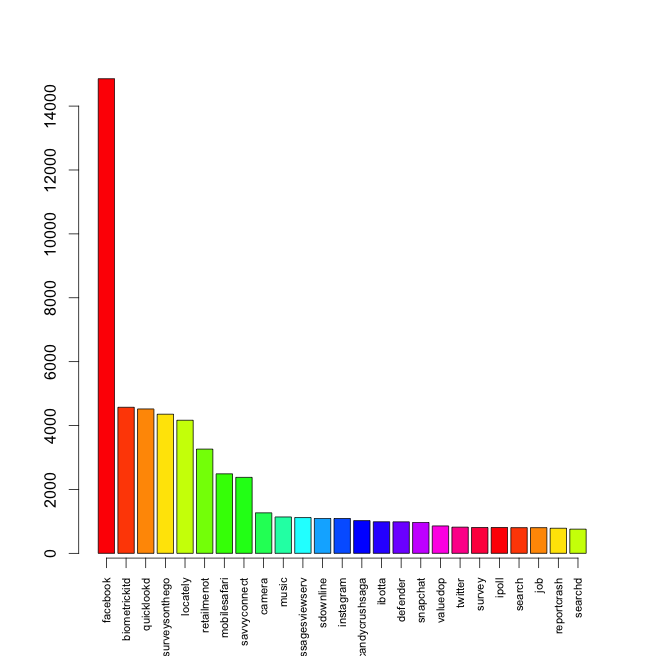 Frequency counts of the mobile applications (screenshot from R console)